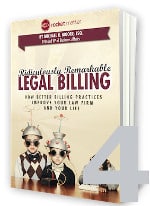 Sending late, large, and surprising bills will ruin your relationship with your clients and hurt your chances of earning more business from them.

Here’s the first non-obvious drawback to bad billing practices: They cost you business. Take, for example, the following real-life anecdote:

A few months back, a good friend of mine, who is a successful technology entrepreneur, told me about his experience with a litigator. Prior to founding his current venture, he was recruited to help turn around a different, financially troubled technology company. Part of his turnaround efforts involved trying to keep valuable employees from jumping ship while he was doing his best to raise additional financing.

Sadly, the company didn’t make it. Worse yet, one disgruntled employee decided to sue my friend –personally – for being “defrauded into” staying with the company. A truly ridiculous claim on the merits but one purposefully constructed to circumvent the company’s insolvency.

My friend hired a local defense counsel and fronted a $10,000 retainer. The case went through fairly standard pleadings. About a year later, the case was resolved prior to trial. During that year, a few months into the case, my friend received one bill where about half of his initial $10,000 retainer was drawn-down. No other bills were sent until a final “catch up” bill was delivered about two months after the case was disposed of.

So, here’s the rub: Was the amount outrageous? Maybe. Maybe not. It’s impossible to tell without a lot more information. However, the billing practice itself was abhorrent. Surprise, delay, poor communication, you name it: It’s difficult to try to imagine a worse way to do it.
The story for the lawyer, haircut aside, has graver implications. Frequently, the biggest sources for billable work are (a) existing clients and (b) referrals from happy clients. That said, it’s often easier to get more work from existing clients than it is to find new clients to give you new work.

Consequently, you want to be doing everything you possibly can to encourage your existing clients to bring more work to you. Conversely, you don’t want to do anything that discourages clients from doing so. Your billing practices influence this, big-time.

Many people live in mortal fear of getting blindsided by a huge, unforeseen legal bill. That fear actually deters prospective clients from seeking out more legal services. Most of us know at least one person with a “I can’t believe the bill my lawyer sent me” story.

But here’s the real tragedy from the legal profession’s perspective: My friend is a guy who values legal services and is constantly involved in deals (a great source of future legal work). He pays his bills on-time and runs in circles with lots of other guys just like him. This lawyer’s horrid billing practice ended up irritating my friend, hurting his own pocket, and losing untold amounts of future business. And it’s not just that particular lawyer who loses in that situation.

Here’s what my friend says to me and probably every other person he talks to when he re-tells this story 500 times (and he will tell it at least 500 times):
“Mike – what is it with these lawyers? Why can’t they just send me a normal bill once a month like every single other vendor I work with?”

This post is an excerpt from the free e-book, Ridiculously Remarkable Legal Billing.

The Leaky Faucet – Where did all those hours go?

Your Clients Are Not Stupid; Stop Rate-Hiking as if You Think They Are