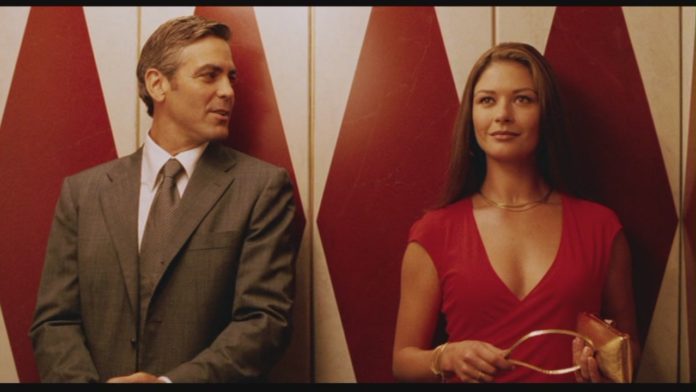 In the penultimate scene of the Coen Brothers’ feature film entitled: “Intolerable Cruelty”, Catherine Zeta-Jones, who plays the femme fatale serial divorcee, Marilyn Rexroth, shows her specialist divorce lawyer and latest husband conquest, Miles Massey (played by George Clooney) – just how she has outwitted him at his own expert professional craft, and how she is about to take him for everything he’s got in something akin to a Wimbledon grand-slam win of: “game, set, match, and championship” – and says to the soon-to-be-very-poor Miles that their time together is now over with the soft and almost lovingly delivered words:

“Miles, you’ll always be my favourite husband. But no more sentiment, darling. I really have to be going”.

Poor love-sick Miles, the inventor of his famous unbreakable “Miles Massey pre-nup agreement” is left sacrificed like a new-born lamb at his wedding altar. Big-hearted but killer divorce lawyer Miles, who previously handled his client Marilyn’s apparent tens of millions of dollars’ divorce settlement thinks, when she tears the pre-nup up, just moments before their wedding vows are exchanged, it is in fact her who is putting herself at financial risk on the misguided belief she is a massively wealthy woman in her own right. The last thing Miles ever took her for was a knockout genius con-woman who was only really ever after his cash.

“Love goes by haps; some Cupid kills with arrows, some with traps” – Shakespeare wrote about love in his romantic-comedy play – “Much ado about nothing”. Falling in love, and then out of love, and then in love again. Not being in love in the first place, but then actually falling for each other.

What is it about love, which makes everyone who gets involved in the modern-day farce called marriage, go so insane?

History and literature are littered with accounts of great loves gone wrong; about inextinguishable lusts dressed up as love; about the falling of great empires at the hands of foolish love – Mark Antony and Cleopatra; Henry VIII divorcing Queen Katherine and secretly marrying Lady Anne Boleyn; Jason Rohde whose wife Susan Rohde tragically took her own life in their Spier hotel room by hanging herself from a bungee cord attached to the ceiling standing on the bathroom toilet seat, because she simply couldn’t bear to share him with another woman; Ronald Cohen, the multimillionaire son of original Camps Bay developer Isidore Cohen – dear love frothing over Ronald who loved his wife Susan Johnson so very much and, with such depth of emotion, he demonstrated it to her with skull crushing love-force and a 3kg art-deco statuette; Oscar Pistorius who gave Reeva Steenkamp everything he possibly could on every single level, and who unleashed his cupid love arrows in a hail of point-blank-range-high-calibre-hollow-point-cannon-strength bullets in the adored South African love temple venue of a guest toilet cubicle.

I sit here on Saturday, in the year of our Lord, 25 April 2020, five-weeks strong after Squirrel told us to stay TF inside and, with stories of ever increasing cases of domestic violence on account of the lockdown, I come to realise in my moment of blinding light, my Nile, my Ganges, my Jordan – that true horror has many faces – and love is definitely one of them.