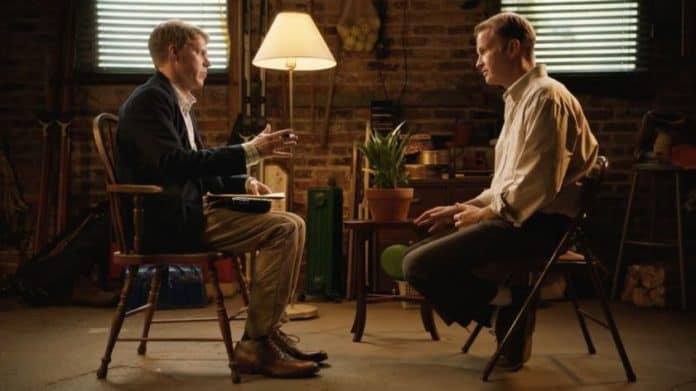 We wrote, rehearsed and filmed this skit at “Jono’s” flat during the course of one full day. Most people believe, when they see the finished product of a film, that it’s as simple as “1-2-3” and it takes no time to conceptualise a scene, then script it, then rehearse it as a rough first rehearsal, then have it directed and endlessly stopped and re-started, then re-directed, then rehearsed over and over again, then a few cuts taken, then filmed a few more times, until finally the director is happy with the final cut of the scene. The length of our scene was perhaps just over two minutes, but it took a full day to get to a final cut, which was far from being even close to perfect.

The funniest part about filming the scene was the “set” – being Jono’s flat – a venue lost in the 1950’s.  The interior, furniture, fixtures and fittings had not been touched since Jono’s old lady had stayed there as a kid with her own mom. The flat had that granny musty smell to it – the smell of near death and of sitting vigil next to a soon to be rotting carcass.  In the bathroom, when you lifted up the toilet seat to take a piss, the chip-board toilet seat was bloated from decades of accumulative piss splash, toilet flush, and flying projectiles of menstruation and faeces. You simply gagged the very second you lifted up the seat and looked down.

There was also a birdcage covered in a see-through tarpaulin, which sat on top of the dining room table, housing an African grey parrot.  The bird was apparently suffering the same fate as the toilet seat, and it whistled incessantly. Whenever I used to call Jono on the phone, I may as well have had been having a conversation with the parrot, as its whistle was just so overwhelming. The inside of the birdcage made a garbage dump looked like the rolling lawns of Kirstenbosch Botanical Gardens. The tarpaulin itself was a Galapagos Island of encrusted bird crap and fallen feathers.

Here is the dialogue and stage direction of the scene:

(Dr Franks is sitting in his chair waiting for his new patient Jono to arrive.  Jono enters the room and Dr Franks stands up to greet him and shakes his hand).

Dr Franks: “Nice to meet you. Please take a seat.”

Dr Franks: “Your referring doctor, Dr Vayneek, has given me most of the information about your life, so let’s just get straight into it.  You’ve come here for an evaluation today.  Please tell me a bit about yourself.”

Jono: “I was educated at Batavia.  It’s a retard school.  I studied woodwork there.  I was quite proud of that.  I got quite a good grade.  I got better than a double G.”

Jono: “So I was quite proud of that.  When I was little and I was about three years old, I watched my mother once get mugged in the veld behind our house. Later I found out afterwards, the truth was actually she wouldn’t hand over the cash to her pimp.  And then…when I was eleven my parents got divorced…my dad married the mother of his love child, and eight years later he was accused of raping said love child, he was actually arrested for it – went to Pollsmoor for quite a while.  Hmmm….yah.  I haven’t had a girlfriend since I was in standard seven.  I was in love with this girl, her name was Cindy.”

Jono: “She…I was crazy about her.  I went to visit her one day.  I found her outside her house in a car with my best friend.  Broke my heart.  I was born Jewish, I had a Barmitzvah and everything.  When I was twelve,  I converted to Christianity.  And so did my mother.  The only person (pause), Jewish person, who speaks to me now is Jesus.  Hmmm….yah…I actually enjoy being by myself.  I like my own company (pause).  There’s a few things that scare me in life: snakes, spiders, death and (long pause) and marriage.”

(Dr Franks gets up from his chair and clears his throat)

Dr Franks: “Ok (clears his throat again) well let’s just end it right there. Ummm…thank you so much for coming (extends his hand to Jono and they shake hands). Unfortunately I cannot help you at all.  Medication just won’t work.  So what I suggest is you go back outside, speak to my secretary and just get a refund of your R500 and good luck.”

Jono then exits the rooms of Dr Franks and the scene ends.

We posted this skit on YouTube and it got about 140 hits before I removed it to make way for another “interesting” Barry/Jono collaboration, called the “The Breakup” skit.