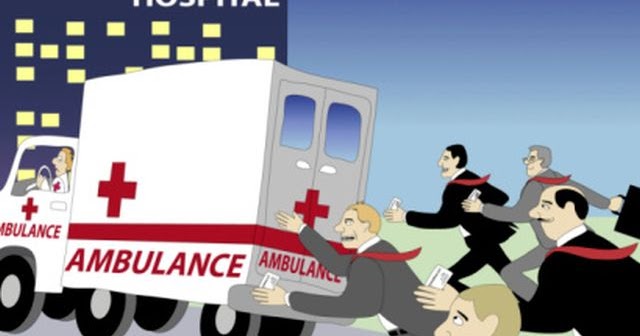 One thing lawyers are famous for, especially in the USA, is being ambulance chasers. This is a lamentable state of affairs and it is still rife, to a certain degree, in South Africa, although the now broke RAF is pushing these lawyer types into medical malpractice claims and dog bite victim cases, where the dog owners are high net worth individuals.

There was a well known Cape Town law-firm, which the courts and Asset Forfeiture Unit eventually took care of. As the Western Cape High Court dealt with this matter, and it having been a reported case, I am within my rights to mention the name of this lawyer and law-firm owner, who was a certain, and very honest I might add, Mr Hoosain Mohamed (let’s call him “Mo”).

Mo was extremely knowledgeable about his field of expertise – thievery from broken black people in personal injury cases – and I was truly privileged to have had him lecture me in the personal injury section of the Attorneys’ Admission exam I wrote back in 1997.

What Mo used to do, was to send out his army of scouts and smurfs to trawl the townships for broken black people, who had been involved in serious motor vehicle accidents. These accident victims were indeed very poor and sad people. Mo would then take on their cases for no upfront fee, and secure a huge settlement from the RAF, then falsely account to his client by showing the client a very much smaller apparent settlement which was received from the RAF (compared to what had actually been paid by the RAF and received by Mo), less his humble fees and disbursements, and then illegally bank the massive difference which, most of the time, landed up in Switzerland, or use the money to fund the purchase of fixed properties in Cape Town in the names of his kids and extended family members.

The sad, broken and poor client got next to nothing instead of the genuine millions of rand settlement he/she was rightly entitled to for now being a crippled, half-dead, limbless, brain-dead, and close to non-functioning and useless person, from society’s point of view.

The very last thing Mo had on his mind was legal ethics – sadly he was the caricatured steal-from-your-own-mother type of shyster lawyer. The sort who give lawyers an even worse name than they unfortunately already have in the honesty department.

I once did a routine about this in a stand-up comedy show, where I tastefully played on the road accident theme:

It always makes me so excited, driving past an accident scene,

Where I can see all that twisted metal,

See the wrecks and the blood and guts splashed on the highway,

But then I say to myself:

So, out of extreme concern, I stop my car, pull to side of the road and get out,

And I start walking around the wrecks (with me on-stage showing the action of frantically walking up and down past the cars),

I hand out my business card’.