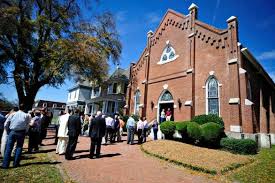 Murphy showed up at Mass one Sunday, and the priest almost fell down when he saw him.

Murphy had never been to church in his life.

After Mass, the priest caught up with him and said, “Murphy, I am so glad ya decided to come to Mass.

What made Murphy said, “I got to be honest wid ya Father, a while back, I misplaced me hat and I really, really love that hat. I know that McGlynn had a hat just like mine and I knew he came to church every Sunday . I also knew that he had to take off his hat during Mass and figured he would leave it in da back of the church. So, I was going to leave after Communion and steal McGlynn’s hat.”

The priest said, “Well, Murphy, I notice that ya didn’t steal McGlynn’s hat. What changed your mind?”

Murphy replied, “Well, after I heard your sermon on the 10 Commandments I decided that I didn’t need to steal McGlynn’s hat after all.”

With a tear in his eye the priest gave Murphy a big smile and said;”After I talked about ‘Thou Shalt Not Steal’ ya decided you would rather do without your hat than burn in hell, eh ?

Murphy slowly shook his head. “No, Father, after ya talked about ‘Thou Shalt Not Commit Adultery, ‘ I remembered where I left me hat.”