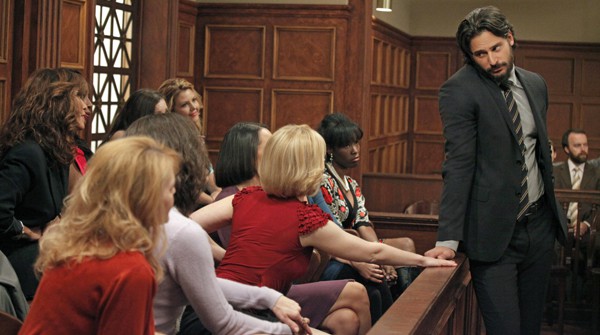 Legal Practice Council interviewer Ms Tshabalala: “In your complaint against our member – Ms Jones – you seem to suggest Mr Varkel pressured you into sex. Is that correct?”

Complainant Ms Jones: “No, Ms Tshabalala, he never pressured me into doing anything”.

Ms Tshabalala: “Oh. Then why exactly did you sleep with your lawyer, Ms Jones?”

Ms Jones: “Well, I’ve always had this thing for a good deal, so I just wanted to know how it would feel to get screwed twice for the price of one by a nice Jewish lawyer”.

Ms Tshabalala: “Oh I see. So, there was absolute consent on your part?”

Ms Jones: “Yes, of course, it’s not like Mr Varkel’s second name is Harvey. He was the consummate gentleman – when he needed to be one”.

Ms Tshabalala: “OK then Ms Jones. Please tell me exactly what you want us to do here?”

Ms Jones: “You tell that f***ing shyster Varkel – if he doesn’t return my calls, I’ll start…I’ll start…boiling domestic animals in his designer kitchen and putting up life-sized pictures of him wearing nothing but his lawyer’s bib outside every Courtroom in the Western Cape High Court. I mean who the hell does he think he is – ignoring me like this?”

In May 2018, and in San Francisco, The California Supreme Court approved new ethics rules for attorneys in the state which included a ban on sex with their clients; but provided no explanation for its decision. The State of California previously barred attorneys from coercing a client into sex, or demanding sex in exchange for legal representation.

The new rule in May 2018 completely banned sex between lawyers and clients, unless the sexual relationship preceded the professional relationship, or the client was the lawyer’s spouse or domestic partner.

The SRA (the Solicitors Regulation Authority is the disciplinary arm of the Law Society of England and Wales) in November 2017 took a more realistic and progressive view, when deciding the issue. The SRA’s code of conduct does not preclude personal relationships between lawyers and clients.

“There are already protections in place, such as conflict of interest rules and a duty to act in the client’s best interests. Ultimately, if people want to have a relationship, assuming SRA principles are adhered to, who is the regulator to say no?” said an SRA executive.

I really do not recall there being anything in the Cape Law Society’s legal ethics lectures, when I took classes for the attorneys’ admission exam back in 1997, which even dealt with this subject. Perhaps I bunked class that day, or I was at my Sea Point kitchenette apartment, standing in front of my cracked hand-held mirror, balancing on one foot covered in a moth-ridden black sock, going over my potential hot female client pick-up lines.