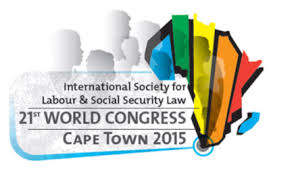 The 21st ISLSSL Labour Law World Congress will take place from the 15th – 18th September 2015 at the Cape Town International Convention Centre, in Cape Town. The South African Society for Labour Law, SASLAW, is honoured to have won the bid to host the World Congress for the International Society for Labour and Social Security Law in Cape Town in September 2015. This is the first time the Congress is being held in South Africa and indeed, in Africa.

The 21st World Congress promises to provide a platform for stimulating discussion on labour and social security law in a global environment where prolonged economic and social uncertainty appears to have become the norm.

This raises hard questions: how can labour law and social security continue serving the ends of collective regulation, equality in the workplace and social justice in developed and developing countries under conditions of relative economic austerity? How must the traditional concepts and institutions evolve to take account of what may well be fundamental shifts?

These questions delineate the main theme of the Congress, which will be explored in more detail in the plenaries and breakaway sessions.
But there will also be scope for relaxation. Cape Town is the gastronomic capital of South Africa, a place of amazing natural beauty, and the region has for many years produced great wines. Visits to Cape Point, Table Mountain (one of the Seven Natural Wonders of the World), Robben Island (a World Heritage Site) and other unique attractions are a must.

In short: we hope to exchange not only new legal insights and ideas, but also to share some of our local culture, custom and cuisine. The organising team will do everything possible to make your visit to Cape Town a truly memorable experience.

Profile of delegates
This triennial event will be well attended by South African Labour Court judges, advocates, attorneys, academics, human resource professionals, trade unionists, employer’s organisations, bargaining councils and other role players in the field of labour law in South Africa and the African continent. International delegates will comprise academics, researchers, practitioners, judges and other labour law and labour relations professionals from many countries in Europe, South America, Asia and North America as well as Australia. Attendance is expected to be around 600 delegates.

Congress themes
In the era of globalisation, the four pillars of the ILO’s Decent Work Agenda – and, with it, the traditional purpose of labour law – ultimately depend on the prospects for the global economy. Since the recession of 2008 these prospects have changed for the worse. Unlike previous recessions it has not been followed by renewed growth. Rather, it has opened up a period of greater uncertainty in which a new paradigm of fragile and unpredictable growth could be in the making.

This raises the spectre of labour market policy concerned more with spreading the burdens of insecurity through negative reforms than sharing the fruits of growth through positive reform. If this is so, how can labour law continue serving the ends of social justice?

To do so, labour law will need to be part of the solution rather than being seen as a “barrier to growth”. This raises conceptual as well as institutional challenges. It means continuing the work of redefining the purpose of labour law that has unfolded in recent years. But it also means going further: re-examining established structures and mechanisms, and the rules that govern their operation, in order to assess their viability, the possibility of adapting them or the need to replace them – and, if so, with what.

These are not challenges of the future; they have been with us for some time, and their urgency becomes greater by the day. The Congress is meant to be a forum for carrying the discussion forward.

The four themes of the Congress should be understood in this context.
“Collective bargaining – and beyond?”, Equality and ‘citizenship at work’ as conceptual foundations for labour law”, “Social security: Which way forward?” & “Labour law and development”.

Academics, practitioners and students are invited to present papers in simultaneous breakaway workshops or to submit posters.

Programme & highlights
The main keynote speakers are Professor Alain Supiot, Doctor in Law at the Collège de France in Paris and Professor Sir Bob Hepple, Emeritus Master of Clare College at the University of Cambridge.

Keynote Speaker Topic – 15 September – What is international justice in the 21st Century?
by Prof Alain Supiot

Universal and lasting peace can be established only if it is based upon social justice . It has been nearly a century that this statement was placed at the beginning of the Preamble of the International Labour Organization. Repeated in 1944 by the Philadelphia Declaration, it is the result, not of an abstract idealism, but the historical experience of the insane massacres that marked the twentieth century. This experiment found a new relevance in our time, marked by the return of staggering economic inequalities, by mass migration of people fleeing war or poverty. However, the terms in which the issue of social justice is presented have significantly changed in a century. The free movement of capital and goods, the information technology revolution, the rise of ecological and monetary dangers, undermine the foundations of the social state, as it was designed during the industrial era. The model of work organization has changed, with new techniques of management by objectives and the development of international production chains. And the system of international organizations established at the end of the Second World War is weakened and does not seem able to guarantee decent work for all. The achievement of social justice therefore requires new legal mechanisms adapted to present times. A few examples will be given, regarding the rights and freedoms of workers on the one hand, and on the other, the institutional frameworks of international social justice.

A round-table forum on Friday, 18 September will be of particular interest to a South African audience, as Judge Dennis Davis, Judge of the Labour Appeal Court and President of the Competition Appeal Court will chair a panel discussion of South Africa’s Labour Relations Act (LRA) 20 years into democracy, The topic is “Have ILO principles contributed to workable labour relations? “A case study of South Africa’s Labour Relations Act 20 years on.” Panellists include: Prof Sir Bob Hepple, Prof Manfred Weiss, Prof Halton Cheadle and Ms Tanya Cohen.