With pleasure – In 1985 I was hired as a conveyancer and was stuck into Groot Dries’ agency conveyancing practice. Learning to collaborate was the first order of the day. Stowell’s employed a receptionist who, when asked to be put through, would respond just: with pleasure”. She had a dark, husky and incredibly sexy voice. I was titillated beyond measure.

When I could stand this no longer, I drove over and asked to meet the receptionist: she was sixty-five in the shade.

Our conversations were never the same again. Reality destroys dreams.

Municipalities are, by definition, third tier government structures. These entities owe Eskom R17bn. Water provision is in a similar situation. This state of affairs was brought about by the State providing services which it could not afford. On a macroeconomic level our state is in the same situation. Go figure.

Day zero for the SABC is said to be February. Good. We need lots of people retrenched in order to drive home the message that running a state organisation does not make one immune to financial reality. I cannot help but wonder whether Mr Motsoeneng will be called to account?

Our Treasury announced this week that it had made substantial progress on the National Health Insurance Bill, having reached agreement (with whom?) on most of the major issues. And we thought it had stalled?

Discovery Bank will launch in March next year as a digital “behavioural bank”. It will provide incentives (think being nudged/encouraged to do the right thing) for good conduct and will reward you for this.

Discovery says that there are now eight million more credit-active consumers in South Africa than the number of employed people. Amazingly there are those who would lend to others who have no work.

Botswana has been rated the best African country for safari travel. Considering that one does not have to pay for long-distance flights, this should be an option we should seriously consider.

SWMBO received a brochure from Sanlam advising that that insurer will be taking on B-BBEEE partners. Factually that entity will be diluting its shares by the percentage “sold” (at a discount and lending money for the purpose) to its newfound partner. Much talk about strategic intent and leverage boils down to hoping that its newfound status will be rewarded in the marketplace.

Momentum has refused to pay out on the death of an insured who was shot owing to his not having declared his diabetic condition. Go figure… and change your insurer if ensured there.

It is forecasted that smartphone growth will drop into negative territory yoy for the first time. Apparently, upgrades are still de rigueur but, owing to the increasing cost of such devices, replacement cycles are lengthening.

The latest electric motorbike comes with a suit and helmet interfaced with the bike. There is no instrument panel on the bike – this is displayed head-up inside the helmet screen as does the rearview mirror. The suit gives haptic feedback such as tapping you on the shoulder when a car is coming up from behind and so on. For those of us who have not finished playing.

“Bananaism”: Build Absolutely Nothing Anywhere Near Anything. The term is applied to those who buy into areas which would develop in order to lock in the gains that are expected in such a development. This leads to open areas owned by some but not being actually used with in a development.

A report in Times holds that only one in four SA residential tenants pays rent in full every month. Furthermore, there is a spike the use of fraudulent documentation submitted by tenants in order to secure tenancies. This is attributed to the jump in the cost of living. Essentially: hold onto good tenants if possible.

It’s not us it’s them: the KZN Department of Health has spent virtually its entire budget for the year on medical negligence claims – that department is reportedly facing claims to the tune of more than R17bn. The department blames unscrupulous lawyers, doctors et cetera et cetera. Imagine what could be achieved if one spent that sum on beefing up the provision of medical services?

The principle that one needs to be registered to lend money, as a credit provider, was reaffirmed a month ago in the Du Bruyn case. Business partners parted ways. One bought the other out, paying in instalments, plus interest. It was argued that this was not an arm’s length transaction but a familial relationship that was being terminated. Nice try. This type of arrangement sneaks up on one: typically, someone wants to buy a house but can only get a loan for just less than the purchase price. So, the parties, quite logically, decide to let the transaction go through on the basis that the balance of the purchase price is on credit. Care must be taken to make sure that such a transaction falls outside of the national credit act.

One of the risks, when leasing property to an individual, is that section 14 of the Consumer Protection Act entitles a consumer to cancel a fixed-term agreement by giving twenty business days’ notice and thus walk away from the term imposed in the lease. Section 14(3) allows the landowner to impose a reasonable cancellation penalty. The response from the profession was to impose, say, a two-month rental penalty on such cancellation. Would such a penalty be valid? A short note, written for STBB is available on the topic – ask me.

There are a number of extra-judicial ways to change one’s matrimonial property system during marriage. One of them is to donate from one spouse to another subject to the exclusion of joint ownership: in theory this is acceptable but has been rejected by our courts with reference to the immutability rule (I have been asked this several times!). The article boils down to two useful discussions i.e. underhand separation agreements and the conclusion of a universal partnership by spouses married out of community of property.

The article in question is written by V Schalkwyk and is in Afrikaans. Ask me for a copy.

I resigned for the sake of South Africa. Ex Min Gigaba

The departure of Minister Gigaba has been hailed as the return of moral leadership: BS. The oath of office for a minister goes like this: I swear that I will be faithful to the Republic of South Africa and will obey, respect and uphold the constitution and other laws of the Republic; and undertake to hold my office as minister with honour and dignity…

So, remaining on as MP requires a different set of conduct rules?

This gentleman said that he served at the pleasure of the president and the ANC. The Prez perhaps (he representing the government and the people), but the ANC? Where does that organisation come into this picture?

It is reported that Mr Zuma is seeking a permanent stay of prosecution owing to the delays in prosecuting him. One’s immediate reaction is of indignation in that it seems probable that the delay is owing to his own machinations. Proving the latter though might be difficult.

Our one deputy president, Mr Mabuza, is in hot water because he took sick leave when he was not ill…

He flew to Russia in a plane provided by the Gupta family. This, he claims, does not make him beholden to that grouping. If someone gives you a R1m fillip, I suppose this is just because they are great friends of yours, why else. One wonders: will the deputy Prez pay donations tax on this gratuity? Will he declare this gift in Parliament?

Sincerity is everything. If you can fake that, you’ve got it made. Burns

The Buddhist monk approaches the hot dog vendor and asks: “Make me one with everything”

So, Buddha orders a hot dog from a cart and gives the guy a $20.

There’s a confused moment of silence and Buddha asks, “where’s my change?”

Vendor says: “Ah, change must come from within.”

Why do mice have such small balls?

Because not very many of them know how to dance.

Mediaeval priests administered the communion in Latin, not spoken by their parishioners. The communion ceremony begins with the latin:

Hoc est Corpus – This is the body

The parishioners converted this to Hocus Pocus 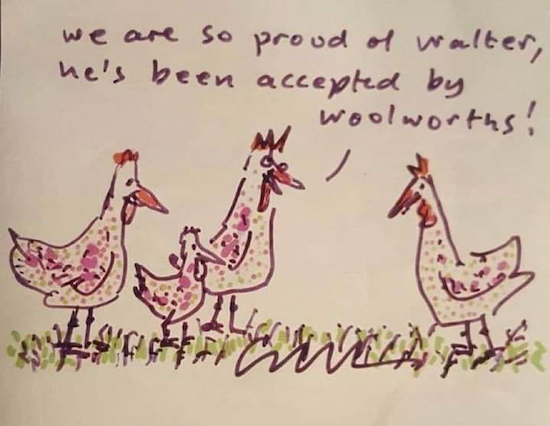