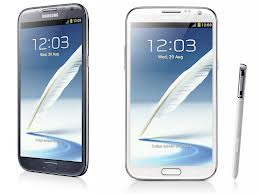 BIG is the new small, at least when it comes to smartphones. And they don’t come much bigger that Samsung’s Galaxy Note II, officially launched in South Africa on Thursday 18th October 2012.
The first consumer cellphones were humungous. They had to be to cram in all the radio wizardry and battery power required to make and receive calls on the new cellular networks – who remembers those Nokia bricks of the early 1990s?
But as manufacturers got better at miniaturising components and battery technology improved, handsets started shrinking, and an arms race ensued to see who could make the dinkiest dialer. A tech journalist colleague recalls attending a trade show in Paris at the height of the miniaturisation craze. He pulled out a hefty Nokia to take a photograph of an exhibit, prompting a French woman next to him to exclaim, “Oh, your phone is so beeg!” Whereupon there was a trilling from her bag and she produced a bejewelled device the size of boudoir biscuit, put it daintily to her ear and said, “allo?”. 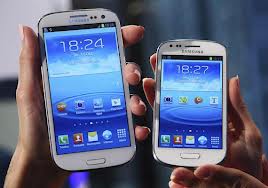 Above, the Note II next to the S3
This smaller is better attitude persisted for the better part of a decade until touchscreen phones came along. Suddenly screens needed to be expansive enough to accept fairly precise input from a finger and to display photographs and video. Apple revolutionised this segment with their iPhone, but until very recently the company stuck stubbornly to their view that the 3.5-inch screen was the optimal size for a touch screen phone. However, their competitors, led by Samsung and HTC quickly cottoned onto the fact that bigger displays on Android powered handsets made for a better video consumption device and provided a lot more screen real estate to show off their widgets, which unlike Apple’s icons which are really just links to apps, could actually display useful information like weather and text messages on the screen without having to open any apps.
Just as important, bigger phones meant the manufacturers could put in the bigger batteries needed to power all the energy hungry new features.
It was like the old miniaturisation arms race again, but in reverse.
Then Samsung went thermonuclear on the competition with the release last October of the Galaxy Note. This 5.3-inch screen behemoth was so huge that even its fellow believers in the bigger is better philosophy thought Samsung had gone bonkers. You can imagine the derision of the Apple fanboys.
Samsung had the last laugh, though. It went on to sell more that 10 million Notes and a new category was born – the “phablet,” a hybrid device that’s part phone and part tablet. 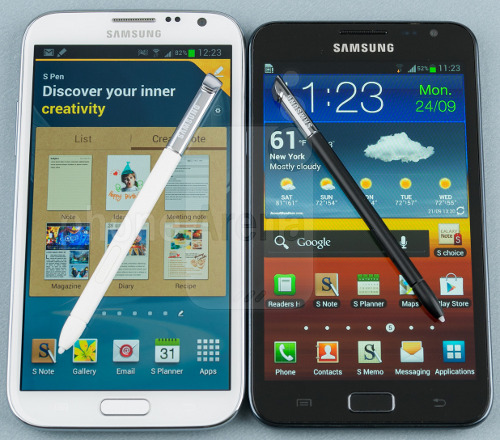 Above: Note II next to the Old Galaxy Note
I confess I was one of those who felt they’d gone too far with the Note. But after spending a few weeks with the device I came to really love this form factor. Browsing the web and watching videos was a joy and because the Note was so slim it never felt bulky.
Now, with the release of the Note II, Samsung has ironed out most of the wrinkles that stood in the way of its predecessor being a truly great device, the biggest for me being the operating system.
The original Note had a dual-core 1.5Ghz processor, making it one of the most powerful phones around, but it ran the rather dated Android 2.3 (Gingerbread). Samsung eventually rolled out an update to Android 4.0.4 (Ice Cream Sandwich), but this was a device crying out for something better. It was like fuelling an F1 racing car on standard road car petrol – it will perform well, even superbly, but never at its full potential.
I’m happy to report that the Note II is now the undisputed F1 champion of the phablet world and tidily beats most other smartphones too. It now boasts an even beefier 1.6 GHz quad-core processor and runs on the latest version of Android, 4.1 (Jelly Bean), a vast improvement on all previous versions and, in my opinion, on Apple’s iOS.
Astonishingly, the HD Super AMOLED screen is even bigger this time round (5.5 inches), but somehow Samsung’s managed to squeeze it into a package no bigger than the old Note. It’s also bumped up battery life quite significantly.
And the S-Pen stylus, which on the first Note was never more than a clever gimmick, now comes close to living up to its early promise as a powerful business, note taking and multitasking tool. It now feels fully integrated into its parent device, rather than like a tacked-on afterthought – pull it out of its slot in the phone chassis and up pops a new, blank note, for example, an inspired touch.
Unfortunately,I was unable to give the Note II a full workout at launch, but I plan to spend more time with it soon, so watch this space for a full review. But, in the meantime I think it’s safe to say that if you’re a big fan of “beeg” phones, the Galaxy Note II is simply in a class of its own.
If you’ve got any questions, tweet me @alanqcooper on Twitter.
Contributed by:
Alan Cooper
Geekbeard