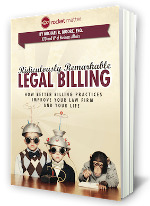 The longer you wait to send out the bill, the more likely you’re in for a haircut and the bigger that haircut is likely to be.

When I was in private practice, the biggest, ugliest bill reductions occurred almost uniformly in cases where a whole bunch of aggregated time entries, all several months old, were bundled together. When I shifted my career and became a client, if I received such a bill, there was virtually no chance I would have any kind of detailed recollection of the work involved, let alone whether the time spent was reasonable or not.

Worse yet, when I received such a bill and was in a position where I reported to a CFO, I couldn’t even approve it myself. I had to get “sign off” on a bill like that to get it paid. Try getting a prickly CFO to approve a bill that’s several months old when that CFO has (a) already costed-out the matter to which it relates and (b) already reported those results to his CEO and the Board of Directors. Good luck with that.

Faced with the choice of going to bat for your outside counsel for full payment on a bill like that or recommending approval with a big discount, you can guess which would happen. It took awhile, but finally my friends in private practice started believing me when I told them that, contrary to what they might think, it’s far easier to get bills paid on time – regardless of how big they are – when they’re sent regularly and on-time. It’s just a corporate fact of life.

Rule #1: The longer you wait to send out the bill, the more likely you’re in for a haircut and the bigger that haircut is likely to be.

The Leaky Faucet – Where did all those hours go?

Your Clients Are Not Stupid; Stop Rate-Hiking as if You Think They Are