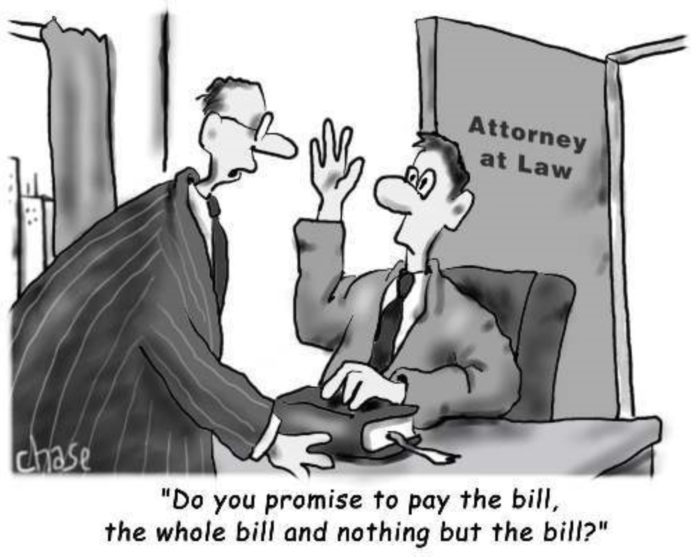 “You see that man over there”, says my loyal client Hymie Cohen.

“I want you to sue him for the R 2m he owes me – mit the capital, mit the interest, mit the costs”.

“What about my legal fees?”

“I said – you get it from that man – mit the capital, mit the interest, mit the costs”.

Clients do not enjoy paying legal costs for various reasons.  Mainly because they come to you in a civil litigation matter invariably as plaintiff, with a situation where they’re already owed big bucks by the defendant and now, by using you, the first thing that happens is they have to throw more money at the problem – money literally flushed down the toilet, especially when it’s a losing game.

Legal fees are a grudge payment.  At least with prostitution there’s something tangible you get in exchange.  Whether it’s good or it’s bad is really not the point. There’s a conclusion is the point. With lawyers sadly you can get screwed twice, three, four or five times, and never really finish.

“Only crap cases go to court.  Any good case does not need a lawyer”.

Clients sometimes do not understand, in civil litigation cases, you’re paying for something truly invisible. You’re buying a service where everything is unmanifested – the pathway to the end of the line as well as the result. The patient is there. He’s on life support, the hospital bills are cranking up, the doctor is pirouetting around the ward, smiling at you as he makes bends and turns like The White Swan in Swan Lake.

He says: “don’t worry, everything is going to be ok. Just be patient with the patient”.

Satan whispers in your ear: “sorry mate, your boy’s coming to visit me soon. I’m sending the reaper round later, right after the wobbly yellow jelly served up at 5pm hits his belly”.

Only with lawsuits, there’s another added dimension – you and satan have to convince an overlord godlike divinity sitting on a gruff bench, who stands in final judgment on whether or not to give your client more life.

These days in the Western Cape High Court, semi-urgent matters can take 6 months to get to the point where you actually have your day in front of the divinity. And then most of the time, the divinity reserves judgment.

That’s a real bummer, because fortunately the client’s haemorrhaging on cash fees has been cauterised, but now the client waits for the final score, and waits and waits and waits. And you do not want to go see the divinity in his/her rooms to speed up the result just in case you piss him/her off and he/she finds against your client.

I read about a trial in London where the judge took 34 months to hand down his decision. And the Appeal Court said it was not an unreasonable delay and the trial judge got it right.

In one of my recent urgent liquidation cases, it took six months from start to finish including for the judge to render his decision. And the judge saw it my client’s way.

My client and I had returned to Jerusalem – we made jokes, we danced, we sang Freddie Mercury’s “We are the champions” while wearing only our underwear and black socks getting drunk on Nikka Japanese whiskey, screaming “banzai” after each swig.

Again, I was my client’s best friend. The best lawyer in Cape Town. He couldn’t get enough of me. Every word I wrote in emails for the next few weeks was comedy gold; was laureate poetry. We were back in love.

But these things are fleeting. Nothing ever lasts in life. As New Jersey gangster Tony Soprano says:

“You’re only as good as your last envelope”.