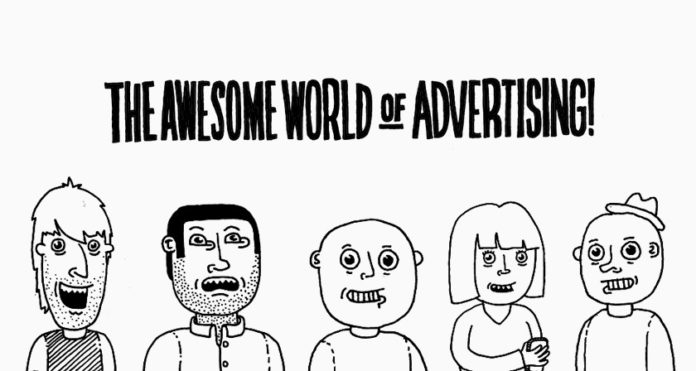 Do you remember the commercial played at the Art Nouveau cinema, just before the main feature started – about those two very different, but actually very boringly similar, very white and privileged South African brothers: “who’ll go on to having very long and successful careers at Rand Merchant Bank”.

Well, I also had a very long and successful career at an international advertising agency, which lasted 22 (twenty two) days.

I learnt so much about the advertising world – I learnt:

I do recall the final meeting I had with the operations manager (everyone had these titles: “art director”, “creative director”, “senior copywriter”, “bullsh*t director”), and when I was told by the operations manager that the agency, which had gone from: “Barry, we want to offer you a permanent copywriting position”, to: “Barry, let’s work out our future relationship – you’re a really good copywriter”, to: “you’re just a freelancer, Barry”, and finally to: “Hey Barry, Friday’s your last day – we really enjoyed your input”.

“You misrepresented the situation to me, you guys run a Mr Confused business, you guys led me on like a girl all dressed up in a slinky black number with pumps, giving me all these signs we were about to do the oldest dance known to mankind, only to be told: “hey Barry, here’s my cheek – give me a peck goodnight”, and you know what Ms Ops Director: “I’m gonna sue you for misrepresentation”.

So let’s just say my advertising career ended right then and there. But I was good: a writer, comedian, copywriter, lawyer (qualified in two jurisdictions) – a bloody genius. Or so I thought. It’s just like the comedy crowd thing: it’s always their fault, not yours, for not laughing at your jokes.

Ad agencies, I learned very quickly, are places of real creative genesis. Every creative was simply an award-winning giant of the advertising world, who could make a dull cornflakes commercial look like the love-making scene from the movie Avatar.

The guy who got me the job was Leo, an Namibian Ovambo comedian, whom I had been doing regular comedy gigs with.

We worked in an open plan office where we shared a desk, but not next to each other – here in this ad agency, being the spontaneous creative big bang which started from a pin-sized singularity, we sat opposite each other.

‘Hey, he’s got some food stuck between his two front teeth. He hasn’t shaved this morning. Did he moisturise properly?’

I had to answer him every time he spoke.

I kept thinking of killing him in the bathroom using the roller-towel dispenser as a weapon of creative destruction, or just resigning and saying:

‘Thanks Leo. You’re a hell of a guy at the end of the day. Thanks for the opportunity. You know what I mean.’

What was funny was listening to him on his cellphone taking care of ‘business’:

‘Yeah tell them that I can get six crates of Jamaican enamel pots at a better price in Mitchells Plain, so the deal is off’.

‘No, I refuse to sell the beaded elephant for less than ten rand, and tell them, I will only take cash”.

So, there we were, right in the middle of our Quentin Tarantino pitch to the creative director and his cellphone started ringing, with me being mid-sentence, and most unbelievably so, he took the call:

‘No, no, no, just tell her I don’t care if it’s that time of the month. If the customer wants a full-house, he gets a full-house.’

You laughed at that last one didn’t you? But it really didn’t happen, nor did any of the other ‘deals’. Leo just spoke rubbish. I only made the deals up to show you what literary skills I possess, and how I was wasted in that ad agency, where every schmuck worried the next schmuck was going to come up with a more creative idea, and the first schmuck’s job would then be on the line.

Every creative jostling for the “mommy, mommy look look at this” creative director’s stamp of approval. The endless open-plan office meetings, where almost every client told the agency its idea was a “piece of rubbish, and to start again”. Where so many scheduled meetings just never took place. Where the traffic section kissed the toes of the creative director who herself flitted around like a fly on cheap Cape Flats’ tik, and where I got dizzier and dizzier and, when it all finally ended, I felt like I had just purged the nuclear waste remains of Koeberg reactors 1 & 2.

I never got the reference letter I asked for, which they promised me.

It cost me R18,000 in UIF I had to forfeit on account of becoming ‘employed’.

There were however a few undeniable benefits: