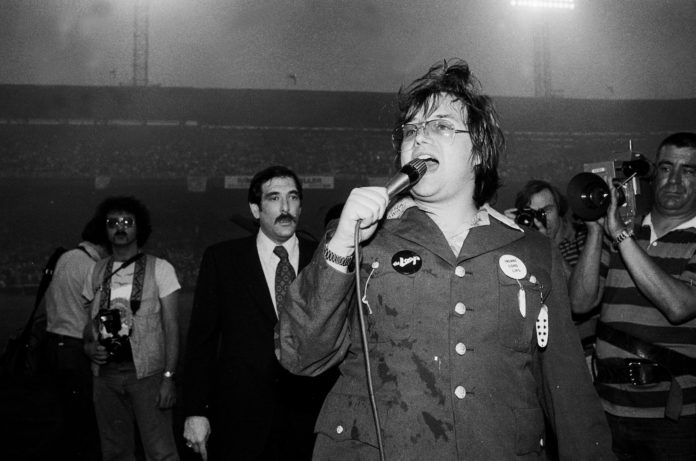 Steve Dahl was a big-mouthed and opinionated white Chicago DJ who almost singlehandedly put the final nails in the coffin and set off the death knell of the 1970’s disco movement. As the clock struck midnight for the new year of 1979, Dahl’s employer – radio station WDAI – changed the station’s format to disco. Dahl claims he was fired. Totally incensed, Dahl set in motion his personal master-plan of an anti-disco crusade which started with his playing snippets of disco records – at his new gig at radio station WLUP – while dragging the needle across the vinyl and cueing sounds of explosions, printing “kill disco” membership cards, and destroying records at small “death to disco” rallies. His fans simply loved it.

Picture this: Dahl drives onto the baseball field like a man possessed – in a Jeep, wearing a military outfit where thousands of disco records, rigged with dynamite, are blown up into thousands of shards of lost dancefloor vinyl dreams, leading his 59,000 disciple-strong crowd to chant in unison with him: “disco sucks”.  Dahl thought it would end then and there, but the mostly-blue-collar-very-many-laid-off Hicksville crowd, fired up by cheap booze and dagga, then descends onto the pitch, each with a vinyl disco record in hand, and proceeds to throw the records onto the pyre, creating a fiery monument of Dantesque proportions, representative of their very own desire to end a musical era.

Rolling Stone journalist Dave Marsh in his 1979 year-end review piece wrote: “White males, eighteen to thirty-four, are most likely to see disco as the product of homosexuals, blacks and Latins, and therefore they’re most likely to respond to appeals to wipe out such threats to their security. It almost goes without saying that such appeals are racist and sexist.”

Bob Odenkirk, the actor who plays the famous sleazy lawyer Jimmy McGill/Saul Goodman protagonists in the popular “Better Call Saul” TV series, claimed all Steve Dahl was doing was lampooning the 70’s culture as a whole, disco was an easy target, and it was not an homophobic event.

Cut-to: The year 2020 – where the DA’s John Steenhuisen, and other like-minded South Africans are waging a propaganda war against the (ANC led) government’s lockdown plan, where Steenhuisen is mounting himself and his washed-out crew of Zille-philes as working class heroes, by oddly rehashing the same tired and outrageous race-based politics; where irresponsible journalists – in an era of what seems to be zero editorial quality control – are publishing provocative articles alleging the ANC is attempting to destabilise the Western Cape by raising the lockdown status back to level 5; where thousands of WhatsApp links are being passed around, like a cheap corona-laced-zol, containing links to articles and videos by some new-on-the-scene-crackpot spewing out his/her own absurdist corona prophecy.

It’s very easy to get wrapped up in an emotionally heightened and watershed moment in time.  Adolf Hitler led a financially bankrupt Germany to rise up against Jews, because they were apparently doing very well while everyone else was starving and broke; against Slavs, Poles, gays, gypsies, and the mentally infirmed because they were “Untermenschen” (sub-human).

It is worth noting the disciples of the “Disco sucks” movement of anti-black, anti-gay, anti-Latino, and anti-everything else which failed to subscribe to their right-wing rednecks’ idea of what the USA ought to be, could very easily now be classed as the Trump voters of that specific moment in space and time.