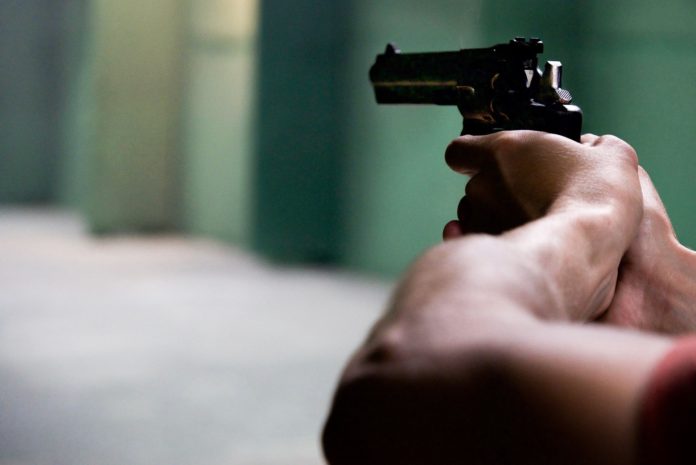 Bowling For Columbine remains the watershed documentary – written and directed by Michael Moore – that deals with the USA’s penchant for guns and violence. Columbine was the name of the High School in Jefferson County, Colorado, where, in April 1999, two students went on the rampage, randomly shooting and killing twelve fellow students, one teacher and injuring a further twenty one-students, before finally committing suicide themselves. It was the fourth deadliest school massacre in the United States’ history. The massacre provoked outrage in respect of issues as to: why was it so easy to obtain weapons, gun control laws and gun violence amongst American youth.

Moore himself, most of the time, can fairly be accused of fanatical anti-establishment conspiracy laden theories and one-sidedness in his treatment of the contentious issues surrounding the massacre, such as: America’s right to arm itself, and odious civil groups such the National Rifle Association; but he does still make some valid points. America has more handguns per capita in the hands of private citizens than anywhere else in the world. So it’s only logical to say there is some direct proportionality at play here between these types of homicides and the number of guns in the hands of Johns and Janes Doe.

In the United Kingdom (excluding Northern Ireland), ‘Bobbies on the beat’ are not allowed to carry guns – only Authorised Firearms Officers (AFO’s) or ‘Specially Trained Units’ have have such a right. So the footage you watched in the very recent London Bridge incident in London, where you saw coppers running across the bridge brandishing automatic assault weapons, in fact belonged to such special units. Consequently, the UK has one of the lowest rates of private citizen gun related homicides in the world.

There was a newspaper report I read, in one of the local SA toilet papers, about a gun incident which took place in the United States, that I found curiously funny and I made light of it in a comedy show I performed in:

No-one. We never really get Americans here, why is that? Perhaps it’s because this club is such a sh*thole.

Maybe it’s because Americans are still busy looking for weapons of mass destruction in the African Curio Shop on the ground floor of this club.

Well, I spent about a month travelling in the USA not so long ago, so you could say I’m slightly qualified to make this judgement:

Americans are, as a whole, and I mean outside of the big cities – well, let’s just say they’re slightly naive.

I’ll give you an example:

There was this incident recently where a gunman went into the Pentagon and started shooting. He managed to kill two security guards before other security guards then shot him dead.

One of the security guards was interviewed after the attack and he had this to say:

“The gunman gave no clue as to what he was going to do”.

I mean WTF was the gunman going to say to the guards before he shot them both dead?

“Hey guys. I’m just visiting here today because my old lady, ya betcha, the skank she has this thing for men in uniform, so I hope you don’t mind if I take a picture of the two of you – it really won’t take more than a few seconds. OK there we go, Bob just go a little to the left. A little to the right. Stop. Perfect. Chucky, step a little forward. Stop. There we go. Perfect. Bob please just fix your tie. And Chucky just button up your shirt. There we go. Perfect.

Okay all together now, at the count of three, say with me:

“Death to America and to all the enemies of Islam” (action: me saying it in an Arabic accent and pretending to pull out a gun).

Bob, Chucky – come on bro’s, don’t just lie there – play along, man, say the words with me, hahahahahaha.