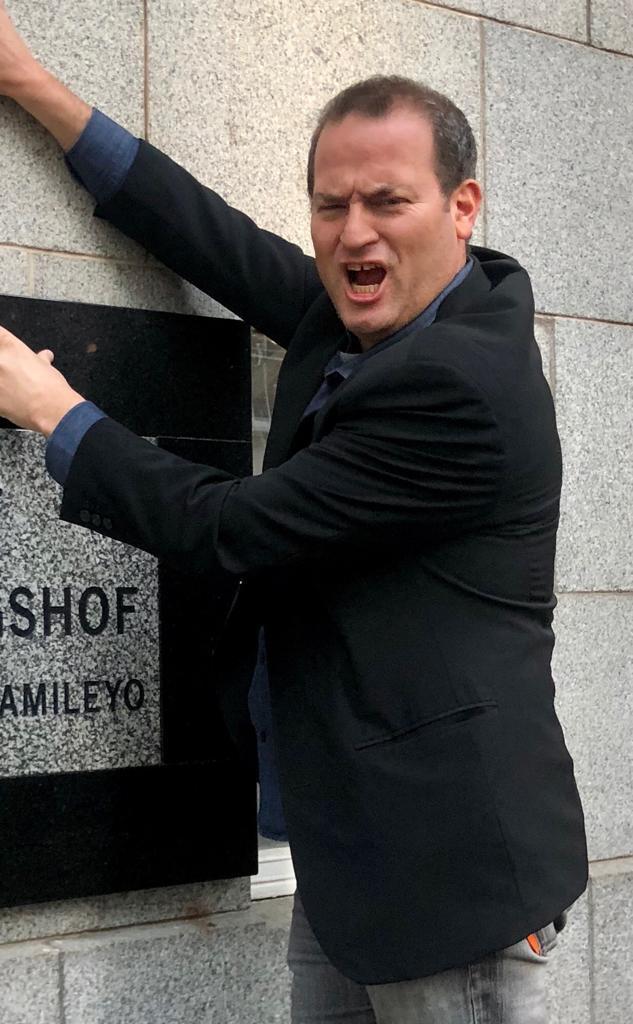 “Sadly, Cape Town comedian Jono kind of faded and melted into white noise and interruption, and then decided to call it a day. The insane heckling audience sideshow had won.  Jono retreated to his chair amongst the crowd.  But I do give Jono his due, he’d done well to handle the crowd.

At that moment I thought it was end titles. The end of the freak show. A complete relief.

But the show was however not completely over yet. There was one last act. The headline act. The final act that crowns all the rest. The guy which the audience has been waiting for all night – the professional, the expert. A true champion. And this was (drum roll please, smoke, bright colourful lights), the….Afrikaner Nationalist audience member.

He rose to his feet and walked to the stage. He steadied himself with his inbred gait-stabilising Isuzu bakkie type anti-alcohol counter-balance.  He put his beer down. He seemed to have something important he wanted to say to the crowd.  An announcement to make before he got started into his act.  He was on the verge of saying his opening lines.  The crowd was hanging on to his every movement.  Time slowed.  It lapsed.  He opened his mouth, looked at the crowd – being accustomed to that feeling of adulation – he was all Elvis.  The world was in his hands.  He brought his hands to his mouth, and then everything changed.  He fell into a sort of delirium.  He opened his mouth. He closed it.  He opened his mouth.  He hesitated.  He opened his mouth ready to spew forth words of comedic delight, but instead of words coming out, vomit came out – thick and lumpy.  He desperately tried to hold it in, to control it.  He needed to give his message to the people. It flowed – chunkily, hitting the floor in big, thick globs. Not even splashing on the floor, because of its dense consistency. A dog manically scurried out from the kitchen area of Fogeys, under chairs and over tables, flying through the air like a missile and hitting the floor in one single movement, face first into the puke, and started immediately lapping it up as if it hadn’t eaten for days:

The Afrikaner Nationalist then ran the gauntlet to the bathroom, knocking over furniture and tables which were in his path as if he were a Casspir on patrol in an Apartheid era township. Thrusting his head in the toilet, he howled for his Broederbond forefathers, he cried for the whereabouts of the Kruger gold, he heaved sighs of pain for his lost Vaderland, he convulsed – spewing forth chunks of koeksisters, boerewors and anonymous black teenage boys’ ejaculate.

And then it was all over. The storm had passed. It was all silent, quiet, still.

And it was time to leave Fogey’s.

To be honest, life sometimes is very strange. Where, in my wildest dreams, could I have imagined I would be witnessing such a spectacle? Even worse, that I would be participating in it as a comedian?  That I would be right there in the middle of the live action?  I could never have imagined this.  Not even in my most insanely drunk and narcotic induced irrational moments. Never in my life – just never.

Well, I’d honestly have to say – if, after this show – this Fogey’s freak show, this Cape Town comedy circuit scene definitely wasn’t art.  And if perhaps, it had resembled art – in some weird and fantastical fashion, then this artist was blind, crippled, filthy, and just simply base.  Just one raw, low-grade and banal hunk of useless person, who should be destined immediately for the rubbish heap.”